If you are creating a Word document, a template or an add-in that is going to be used on PCs with different language versions of Microsoft Word installed, you need to pay attention to the fact that the names of the built-in styles are language-specific. This article discusses some of the problems that may occur. In addition, you can download a Word document that lets you create a list of the local built-in style names with the click of a button.

The article also includes information about the different types of styles supported by Word.

Problems in relation to STYLEREF fields

STYLEREF fields are often used to repeat e.g. document headings in the document header. This is a great feature. The syntax of the field code is:

See the article STYLEREF Fields and Language-specific Style Names for information about the problems that can occur in relation to STYLEREF fields when different language versions of Word are involved and for tips on how you can overcome the problems.

Problems in relation to macros

In macros, you may often need code that applies a style or manipulates a style. If you insert the name as a string as shown in the following example, the macro will result in an error if it is executed on a PC with a non-English version of Word installed:

Fortunately, there is a solution to that problem. The WdBuiltInStyle enumeration provides constants for the built-in style names. However, Microsoft developers seem to have forgotten constant names for all new styles added in Word 2007 and later versions (but as shown below, there is also a solution in that situation). In VBA, you should always use the style name constants or the corresponding values. This way, your code will be independent of the installed language version of Word. The code line above would then look as follows:

In case you need one of the built-in styles for which a name constant is missing, you can use the value instead. Actually, you could also use the value even if a name constant is found but in order to make your code easier to read and understand, I suggest you use the name constants whenever found. All built-in styles have a unique value. All the values are negative. For example, "Heading 2" has value -3. This means that the following code line would give the same result as the code samples above:

In order to make it easy to create a list of the local built-in style names, I have created a Word document you can download via the link below. The document contains a pre-completed 10-column table that includes the following for each built-in style – a total of 375 styles are included:

The document contains a couple of macros that can be executed via buttons in the document. Click one button and all local styles names will automatically be filled in. Another button lets you clear the local style names.

The 375 built-in styles are spread across:

You will find more details about the different style types below.

104 new styles were added in Word 2013 - they were all table styles! In Word 2016, 4 new paragraph styles have been added. The total amount of built-in table styles is huge compared to other types of styles, especially when taking into consideration that only a small part of Word users care about Table styles.

The illustration below shows page 1 of the Word document including the instruction, the buttons and the top of the table: 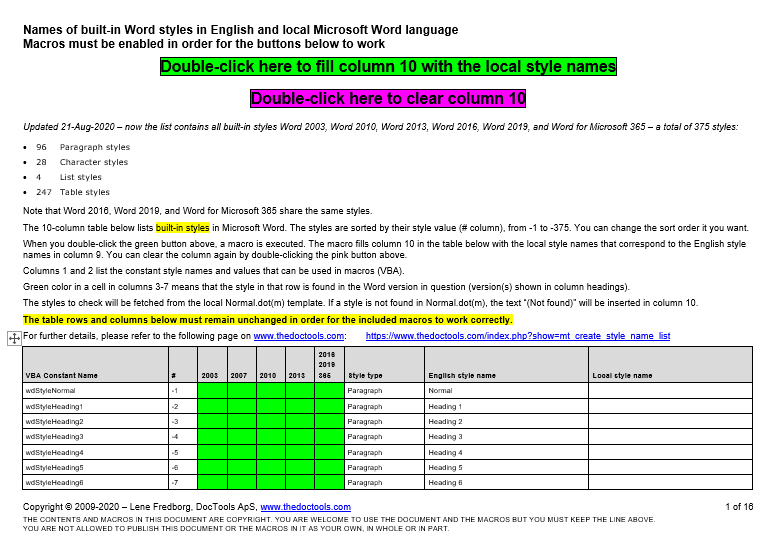 Follow the instructions in the document. Please note that you need to enable macros when you open the document in order to be able to use the functionality in the document. The previous version of the document was in .doc format. The updated version is in .docm format which means it cannot be used in Word 2013. The macros have been tested in Word 2007 and later versions, including Word 2016.

If you do not have access to the language version of Word for which you want to retrieve the styles names, you may send a copy of the document to somebody who has that version installed and ask him/her to run the macro, save the document and return it to you. Alternative, you may download and install the desired language pack (previously, you would have to pay for extra language packs but they are free for Word 2016). How to get the Word document with the macros

Right-click the link below to download a Word document, "Create-List-Of-BuiltIn-Styles_DocTools.docm", that lets you create a list of local built-in style names:

About the different style types in Word

The document you can download via the link above includes information about the style type for each built-in style.

When you create a new style via the user interface in Word, you can select from the style types listed in the leftmost column below.

In column 2, the VBA constant for that type of style is shown (WdStyleType Enumeration). Column 3 shows the value corresponding to the constant.

When checking for styles of a specific type in VBA, you can use either the constant or the value. Examples:

As for the style names, your code will be easier to read and understand if you use the constants instead of the values.

The user interface of Word does not include a style type option corresponding to wdStyleTypeParagraphOnly.

In the Styles Task Pane in Word, the three styles will look as follows:

There appears to be no difference between the styles created as wdStyleTypeParagraph and wdStyleTypeLinked. They both appear with the symbol consisting of a Pilcrow and an a: ¶a.

The style of the type wdStyleTypeParagraphOnly appears with the Pilcrow symbol only, ¶.

If checking the style type, via VBA, of the three styles added above, the results are as follows:

But .Linked returns values corresponding to the type shown in the Styles Task Pane, regardless of whether Disable Linked Styles is on or off:

If you create a new blank document in Word and check which styles are found in the document, e.g. in the Organizer dialog box (can be opened via Developer tab > Document Template > Organizer button), you may only see:

But if you paste the following line in the Immediate window in the Visual Basic Editor and press Enter:

you will see a large number, e.g. 373 in case of Word 2016. This means that the document contains all those styles but they don't appear in e.g. the Organizer list unless they have been in use.

If you count the styles in a blank document that has no custom styles, e.g. using the following line of code in the VBE Immediate window, the result in Word 2013 and newer versions is 373 styles.

However, note that the document you can download above includes 376 styles. If you use the macro below to list all built-in styles in a new document, you will see that the result is 373 styles – the same as above:

If you compare the resulting style names with the list you can create using the document you can download above, you will see that the following three styles are missing when listing built-in styles using the macro above:

The styles do exist and therefore the macro above should include them in the list. But it doesn't. Maybe these styles are added for special purposes.

Over time, I have found many misleading or wrong translations in Danish versions of Word. Such issues are most likely found in other languages too. In relation to the styles names I found a really problematic translation issue:

Note that the only difference in the Danish names of the two styles is a lowercase and uppercase L. Since styles names are not case-sensitive in use, the two names are in reality identical which shouldn't be possible. If you, for example, type "SmartLink" in the Apply Styles dialog box, the style Smartlink is applied. You can't apply SmartLink (with the uppercase L) unless you select it directly from the style list somewhere.

If you type "smartlink" or another variation that does not match one of the two style names exactly, Word shows an error message, telling that "smartlink refers to more than one style" (see illustration below):

Via the link below, you can download a PDF document that contains the style names of almost 140 built-in styles in English, Danish, German and French (the style list does not include styles added in Word 2013 and newer versions):

Please note that all free Word tips, macros, add-ins and videos are provided “as is” and without obligation. See also detailed Terms of Use

Word Add-Ins – Ready for Use